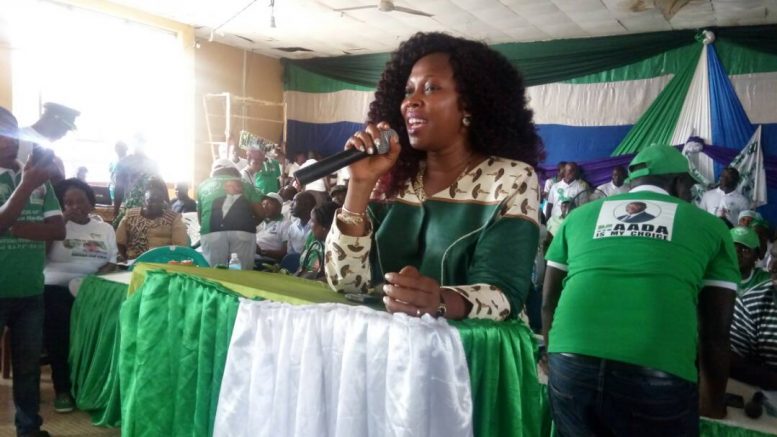 Fatima Bio is naturally a good person who has the love for children and who will never say no to requests made to her, reflects Hawanatu Bangura, a resident of Juba Hill.  Hawanatu Bangura lives close to the Bios at Juba. She is a Themne from Magburaka, and her husband is a Limba from Thonko Limba Chiefdom.

Both of them shall be voting SLPP in the 2018 General Elections for no other reason than the goodness portrayed by Mrs. Fatima Bio, the wife of Retired Brigadier Dr. Julius Maada Bio the expected flagbearer for the Sierra Leone Peoples Party.

According to Hawanatu Bangura, Mrs. Bio is naturally a good person who has the love for children and who will never say no to requests made to her.

A Focus On Children And Education 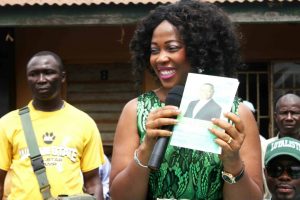 According to Hawanatu, “Since the Bios came to live at Juba a lot of people have benefited from them but most especially from the wife.” “Many children in this area who were not going to school before are now going and many children who didn’t have books, bags and shoes now have them all, thanks to Mrs. Bio.”

Hawanatu said that she had made many requests from Mrs. Bio to which she always attends.

She said that she has no ill word against the ruling All Peoples Congress party because that the party she and her husband voted for in the past two General Elections but “Mrs. Bio has made us change our minds and will be voting SLPP for all the positions”.

Hawanatu who recently traveled from Magburaka after attending a funeral there said that the message about Mrs. Bio’s philanthropic character has reached Magburaka and beyond.

Showing Gratitude To Fatima Through Ballot Box For Husband

She said that most people around the Juba area who have benefited from the Bios are not showing themselves openly now but ” they will speak their minds and show their appreciation through the ballot box,” she said confidently.

“All the parliamentary seats in this area are going to be won by the SLPP,” Hawanatu said. “And Maada is going to get most votes here mostly because of the good works of his wife.”

Hawanatu disclosed that Mrs. Bio gave so many clothes to her son, Gibrilla that they will not be buying clothes for him for many years.

A lady who prefers anonymity said that she once went to Mrs. Fatima Bio to ask for help to take her sick child to the hospital.

” Mrs. Fatima Bio surprised me because she gave me more than I was ever expecting,” the lady explained. “She is a natural giver not about politics. The past two elections I voted APC, but I shall vote for SLPP this time to show my gratitude to this woman.”

The lady said that SLPP must rest assured that the party will win all the seats in Freetown with Dr. Bio scoring the most votes in the city.

“The news is spreading everywhere about the good works of Mrs. Fatima Bio, and many people are warming up to her.” She concluded.