Freetown March 20, 2018: The attention of the Sierra Leone People’s Party (SLPP) has been drawn to a post making rounds on social media titled “NEC CALL TO ORDER” in which it is alleged that President Koroma who is also Chairman of the All People’s Congress Party (APC) has instructed the commissioners of NEC to implement measures that have not been mutually agreed by the two political parties set to participate in the presidential run-off on the 27th day of March 2018. 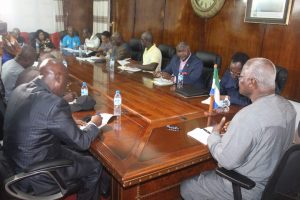 The said claim if it is from the chairman of the APC is misleading, and a well-calculated move to interfere with the independence of the National Electoral Commission and give an undue advantage to his party the APC in the March 27th presidential run-off. Even more importantly, such interference is a blatant violation of Subsection 11 Section 32 of the Constitution of the Republic of Sierra Leone to wit:

“In the exercise of any functions vested in it by this Constitution, the Electoral Commission shall not be subject to the direction or control of any person or authority”

In a Political Party Laison Committee meeting held on the 19th March 2018, both parties in the presence of three commissioners agreed on certain measures in a bid to address the many concerns raised by the two parties. For the President to have called the commissioners to state lodge and compel them to accept measures that were not discussed in the said meeting is completely unacceptable and the SLPP with not subscribe to the whims and caprices of the APC chairman who is bent on doing everything to give an advantage to his failing APC party. The interference of the APC chairman into the electoral process will not be acceptable by the SLPP as it poses a serious threat to the peace and stability of the state and undermines the entire credibility of the electoral process and for which the APC chairman shall bear the greatest responsibility for any consequence that will ensue.

Let it be known to the general public and the international community and all observers, that the SLPP will not accept any change to the rules of the electoral game as dictated by the APC chairman. We shall not accept any military or police vehicles to transport electoral materials apart from providing the normal security.

The SLPP also condemns the persistent subtle intimidation of NEC officers by the APC and their recent antics of taking independent commissioners to the state house to discuss electoral matters. While we have continued to keep our peace, we cannot be intimidated by the APC and its Chairman who has refused to condemn the tribal and hate speeches made by his party and also the violence perpetrated by the APC against our membership.

Therefore, the SLPP is calling on the international community and all international observers to rein in on the APC chairman to cease and desist forthwith from any further interference with NEC as such is bound to impugn the credibility of the entire electoral process. NEC is an independent body and he cannot continue to interfere with its operations.