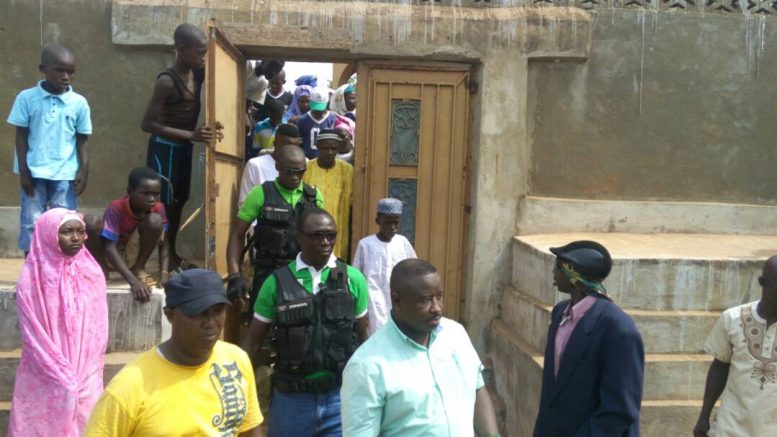 AS THE WRITING ON THE WALL GETS BOLDER, Kambia District Goes Green! 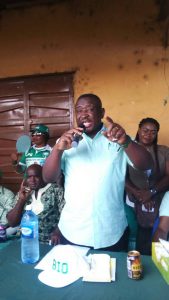 Kambia District is the destination and the train -the Green Train is on the roll.  Today (02/02/2018) the GREEN TRAIN heads North, heading to Kambia and is currently in the town of Rokupr, where members of the team visited the local masjid to offer Friday prayers.

Earlier this morning the retired Brigadier Julius Maada Bio and his running mate Dr. Mohamed Juldeh Jalloh, together with other key SLPP stakeholders, including the national campaign chairman, Alie Sanjan Kabba, visited several towns in the Kambia District, like Bamoi, the famous weekly trading center where they meaningfully engaged the people.

With passionate fanfare and an abundance of love, the team was welcome In all the places they went.

“The SLPP is going to get more votes in the Kambia than in any other district in the north,” vowed Mohamed Dumbuya, a Bamoi resident who is one of those who recently switched over from the APC to the SLPP in a series of mass northern cross-overs that shocked the usually chest-thumping APC national secretariat.

Now “the writing on the wall” is getting bigger and bolder for the APC. And the message is clear: “start packing your Ebola bundles and heading for the next available exit door through the cheapest Toll Gate”!

Some sly-heads in the AYAMPI GANG have already packed out (or have been packed out) and are now busy trying to paint a genial image of themselves.  Others are beginning to line themselves up as “possible prosecution  witnesses” to what some APC insiders are  disgustingly describing as “a free-for-all looting spree in every sector.”

No wonder the dwindling APC cult is getting increasingly desperate as they scamper to hold on to their loots and their fast receding powers because they exactly know what they have put this country through for the past ten years.

But right now the SLPP leadership is entirely focused on winning the hearts and minds of a traumatized population laboring under so much APC “Sufferation.”

The call is going out to everyone: “Let’s GET TOGETHER AND REDIRECT THIS SINKING SHIP BACK TO THE DOCKS FOR MAJOR REPAIRS AND A FAR BETTER RELAUNCH”!

For the New Direction,

And for the retired brigadier Maada Bio and Dr. Juldeh Jalloh!

ONE COUNTRY, ONE PEOPLE!!!