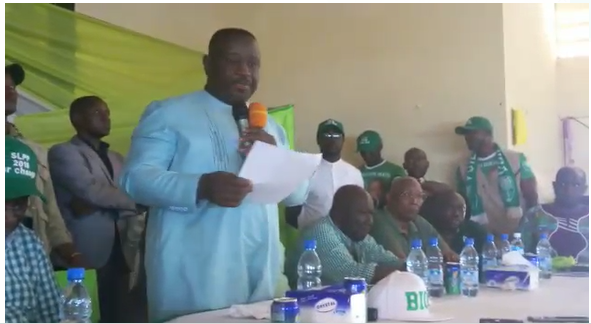 I am deeply humbled by the membership of the great Sierra Leone People’s Party (SLPP) for giving me the singular honour to carry its flag as Presidential Candidate for the second time into the Parliamentary and Presidential Elections scheduled for the 7th March 2018. I thank you all for the confidence and trust that you have reposed in me to be your Flag Bearer and to provide the strong, visionary, disciplined and credible leadership to change and transform our beloved Sierra Leone into a middle-income country of the 21st Century.

The first time I was bestowed this honour was in 2012. On that occasion, I believe we won the presidential elections but lost the results declared by Christiana Thorpe, Chairperson of the National Electoral Commission (NEC). Our attempt to invalidate her action was frustrated by the Courts which technically avoided consideration of the merits of our case.

We were faced then with a stark choice: either to accept the results as declared or insist upon a proper verification of them. We felt compelled to choose the former because we were deeply conscious of the disturbing repercussions awaiting the hapless majority of our people and also because we were not oblivious of the fact that we were still emerging from the throes of a devastating 11-year Civil War.

The bad governance of the APC government under President Koroma has made Sierra Leone one of the poorest countries in the World and the third worse country in the World where people do not have enough food to eat.

Our decision to let the 2012 results stand should therefore not be misconstrued by anyone. We knew it would expose the masses of our people to the suffocating cesspit of APC government misrule for yet another five years.

So for these 2018 Elections let there be no mistake. The SLPP will not accept results of elections that are not credible and transparent and are not a true reflection of the will of the electorate. Furthermore, we insist that the election environment must completely eschew any form of intimidation or the use or threat of violence. All candidates owe it as a duty to the entire citizenry to ensure that they pursue their aspirations only in such an environment. And the Election Day, 7th March 2018, must be made a day like any other. Nothing more, nothing less.

The 10 years of APC government misrule and economic mismanagement since 2007 has created considerable suffering for our people. I have seen this first-hand during my nationwide tour of the country. The bad governance of the APC government under President Koroma has made Sierra Leone one of the poorest countries in the World and the third worse country in the World where people do not have enough food to eat.

We are a rich country endowed with enormous natural resources but the APC government has made us into a poor people, where our youth do not have jobs, our teachers, our nurses, our police and all public servants are poorly paid. Under President Koroma’s APC government, our education system has been completely decimated while they send their children to private schools in America and England.

This despicable state of affairs has to change. The people of this country are yearning for change and change is inevitable and inescapable. The SLPP is ready and prepared to lead this democratic change on 7th March 2018. In these Elections, I am again offering the nation hope and a new promise that Sierra Leone will be better for all under my leadership.

I promise a New Direction for Sierra Leone as a united, peaceful, progressive, dynamic, confident, enterprising and happy nation where the people have unlimited access to jobs, food, education and health services and where there is equal justice and equal opportunity for all. We must transform Sierra Leone into a Middle Income Country of the 21st Century. This is my vision for Sierra Leone.

The flagship of our strategic priorities will focus on developing the country’s human capital through free education. We believe in giving every child a good education so that they can develop themselves, support their families and build our nation for the future.

To achieve this audacious vision, we will change and transform our economy through diversification, transformation of our agricultural sector through mechanised commercial farming, invest in building our critical infrastructure and above all, provide efficient and effective political and economic management of the state and its natural resources guided by respect for the supremacy of the Rule of Law.

Our New Direction will give every Sierra Leonean the ladder of opportunity to climb and achieve their greatest potential for personal development. Our New Direction will ensure the efficient political and economic management of the state and its natural resources to capacitate our country to pay for and finance all our basic and essential services and to invest in our critical infrastructure for sustainable development.

So for those of our compatriots who are still sitting on the fence pondering on whom to vote for on 7th March, I implore you to see for yourselves the daily suffering of the masses of our people. The realities of excruciating poverty and unaffordable education; a youthquake of unskilled, underemployed and unemployed youth roaming the streets; ballooning food prices and food insecurity; widespread indiscipline and the breakdown of law and order, are all too stark and unmistakable.

This Manifesto is the product of very extensive and intensive consultations nation-wide. It defines the New Direction for Sierra Leone and embodies the hopes and aspirations of the suffering people of this country. I, therefore, commend this Manifesto to you for your approval and ask that you signify your agreement by voting overwhelmingly for the SLPP to bounce back to power in the State House, in Parliament and in all the Local Councils around the country.

The future of your country and your children is now firmly in your hands! Therefore, it is my singular privilege as the Presidential Candidate to formally launch the People’s Manifesto by the Sierra Leone People’s party for the 7th March 2018 elections.

Thank you and God bless you all.