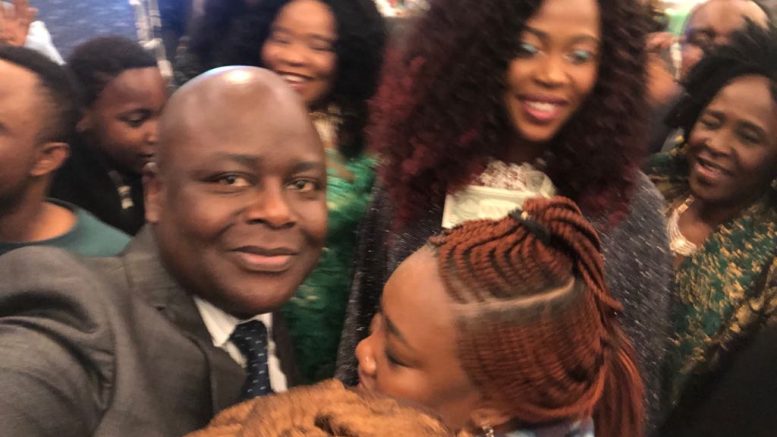 The crowd was poised. The evening was gentle.  Old friends mingled with new acquaintances. All were embracing the night in anticipation of Fatima Bio’s arrival.  A gentle breeze blowing through the banquet doors came with the sweet and tantalizing smell of perfume as they flung open.

It was the moment we were all waiting.

Fatima Bio is here.  She arrives in certain elegance, beaming with an infectious and gracious smile, seamlessly letting her iconic beauty to radiate like a shining star into every corner of the marvelously decorated hall. 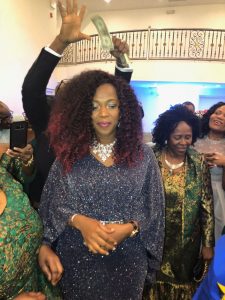 I come here tonight, humbled by your affection, inspired by your commitment, and determined now than ever to champion the cause of our people. – Fatima Maada Bio

The sky seems to fall on the bright shade, making visible the oversized and yet, the simplistic personality of Fatima Bio.

Fatima’s charm and charisma quickly fill the night and hall.  Glancing across each table, she was hugging friends, shaking hands and paying respect to the community of friends and family who assembled to celebrate and fundraise with a once in a lifetime potential first lady of Sierra  Leone.

The Julius Maada Bio (JMB) women, and the Sierra Leone People’s Party in North America, NJ Chapter, were the host of the event.

The hall was exquisitely fanciful with premium food to cater to a crowd in a class act, making the event a top notch. Septimus Kaikai, Chairman of New Jersey chapter, commenced the occasion with a brief remark of appreciation and gratitude for the presence of both the Guest of Honor and the patrons who had come from far and near to offer their support.

The MC for the evening was Madam Rugiatu Mustapha, whose opening remarks set the stage for an evening of thrill and excitement.

The JMB event was a political fundraiser, offering all the highlights of a night engulfing in the iconic presence of a grand matriarch with the touch and feel of a gentle, loving soul. Fatima imbues so much feeling a warmth, and by her sheer presence, she inspires and compels. 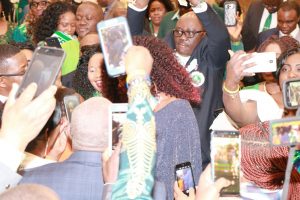 Walking down the stage, clad in a light grey sparkled draping evening gown, Fatima was an imposing personality.   At five foot nine, with her glowing and radiant smile, she gently reached for the mic and started with these words:

“I come here tonight, humbled by your affection, inspired by your commitment, and determined now than ever to champion the cause of our people.”  Fatima also said, “Sierra Leone cherishes your love of country, and we hope together, and as a formidable SLPP community, we can lead sierra leone to the glory it deserves.”

Fatima concluded her remarks by encouraging all Sierra Leoneans to remain faithful to the promise that binds us together. She thanked the vision of the JMB women as well as every member of the Sierra Leone diaspora community for their dedication and relentlessness in pursuing the hope of a better Sierra Leone.

Fatima travels home on the 5th of February to join her husband on the road, along with the trails, and into the far reaches of the nation campaigning for a “New Direction” now encapsulated in the SLPP manifesto.