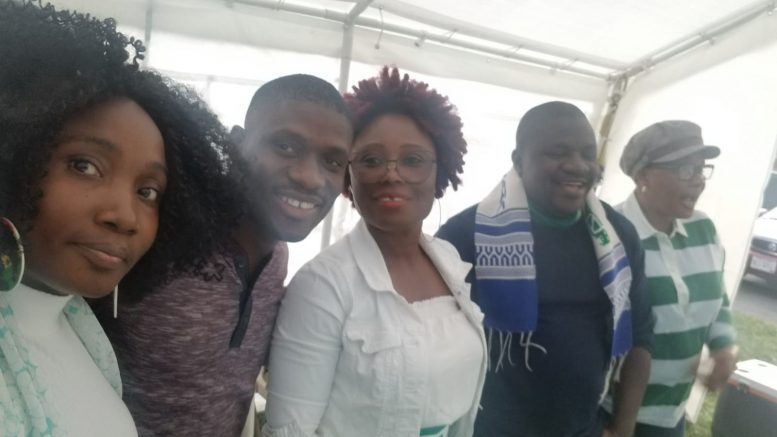 You have seen nothing yet, says Chairlady Mrs. Miatta Abu-Rogers. Membership drive BARBECUE event orchestrated by the Young Generation under the impressive leadership of Mr. Moses Sarttie signaled the demise of the slumber nights of SLPP Ohio Chapter. We’ve lit a candle under this chapter and it must continue to burn vigorously, reiterated by Mr. Moses Sarttie.

Although publicity for the party was brief, it drew a rational crowd from the nooks of Columbus and beyond. In fact, few representatives of other opposition fanatics were present. Besides, we picked up new members and some inactive members were impressed, they vowed to reactivate their memberships and play vital roles to promote our party.

The majority of the people who attended this spectacular event expressed skepticism that such a spontaneous party garnered tremendous accomplishment.

DJ Rock Well Mr. Mustapha Koroma, (Publicity Secretary) constantly released music of today and yesterday, no time to sit or stand without dancing. We danced and generated sufficient heat to scare away the bitting end of a summer cold.

Our gathering was climaxed with excellent speakers, they hammered home the primary motive of SLPP; the sincere love for our beloved country Sierra Leone and our tenacious intentions to improve the lives of our people who have languished in abject poverty for the past decades.

In a bid to foster Ohio chapter and SLPP, our fervid Chairlady is kindly pleading with all members to fasten their belts for more activities that are underway.

Also, she must hasten to reiterate her utmost appreciation for the past executive for their enormous support given our chapter especially our vibrant national Secretary-General, Doctor Peter Karim-Sesay.