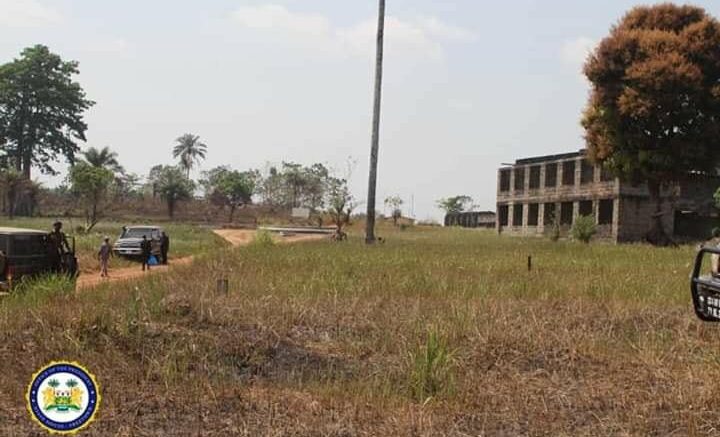 Kailahun, Eastern Province, Friday 25 January 2018 – His Excellency President Julius Maada Bio has paid a working visit to the Bunumbu Teachers College and assured that his government would start the reconstruction of the college, as part of his ongoing thank-you tour in that part of the country.

The institution and Government Technical Institute are constituents of the Eastern Polytechnic in Kenema, with a third campus in Woama, Kono district. It legacies in teacher training and origin date back to 1924 with the opening of a Catechist Training Centre in Bunumbu by the Methodist Mission.

In his welcome address, Paramount Chief Member of Parliament, Cyril Foray Gondor, said they were excited to receive the President for the first time since his assumption to office last year. He said President Bio was a visionary and God-sent leader who was ready to deliver on his promises, adding that that was why the people of Kailahun district overwhelmingly voted him.

He said the Bunumbu Teachers College was the second oldest higher institution of learning in the country that had produced lots of reputable citizens in the country and therefore commended the government for wanting to take the bold step to revive the institution.

Minister of Technical and Higher Education, Professor Aiah Gbakima, said the President had promised, in his New Direction manifesto, to increase the number of qualified teachers in schools, adding that it was, therefore, imperative on the government to restart the college and to offer quality training for teachers across the country.

He disclosed that the Arab Bank for Economic Development in Africa (BADEA) was in consultation with the Government of Sierra Leone to reconstruct the college while assuring the gathering that classes were expected to commence in the next academic year.

In his keynote address, President Bio said his government had placed priority on education because it was the foundation on which to improve the lives of Sierra Leoneans. He noted that the college had contributed a lot to the development of the country and therefore needed the urgent attention of the government.

He also said that the people of Sierra Leone had suffered for far too long and that the only way to change that narrative was through the provision of quality education for the future generation.

“This year, we will start the reconstruction process, and we hope that classes will start in the next academic year. We want to give the necessary skills to our children to enable them to navigate this difficult and competitive world. We are giving our children everything to make sure that they succeed in life,” he assured.

In another engagement at the Kailahun mini-stadium, President Bio said he was thankful to the people of Kailahun for always standing by him and the Sierra Leone People’s Party. He said his primary motive of visiting the district was to say thanks to the people for overwhelmingly voting him into office.

He mentioned that Kailahun was a neglected and deprived district within the country that lacked essential social amenities, saying that his government was into a series of negotiations to bring development to the District.

President Bio also noted that the Pendumbu-Kailahun road project had delayed because his government did not meet funds for the project but said that the Ministry of Finance was working out modalities to restart and complete the project.

“As a caring government, we are doing our best to better the lives of our citizens. This, we are doing through offering quality education, providing improved healthcare services and food security for our people. This year, we will start the rehabilitation of the Kailahun Government Hospital and the Nixon Memorial Government Hospital to improve the healthcare services in this part of the country,” he assured.

Chairman of the Kailahun District Council, Kekeh Sahr, said that the people of Kailahun were grateful to President Bio for introducing free quality education in the history of the country. He added that Kailahun was a deprived district but expressed optimism that with the new administration, the district would be able to catch up with the rest of the country regarding development.