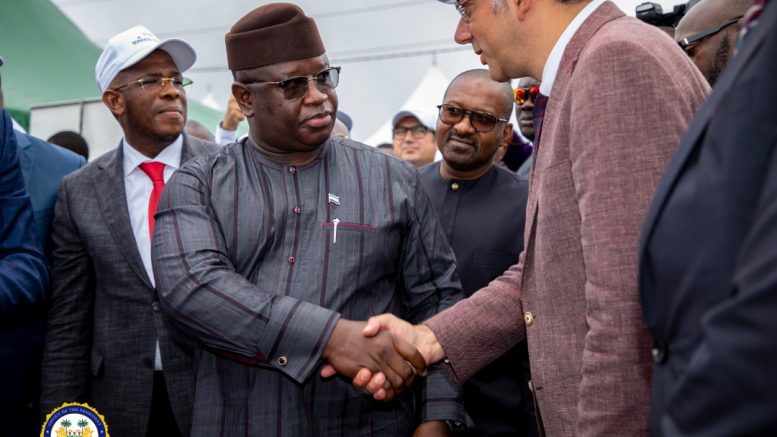 His Excellency President Dr. Julius Maada Bio has turned the sod to start the construction of the SONOCO Assembly Plant Facility for baking equipment and training center for food technology and related electrical and mechanical maintenance technicians, at Wellington, east of Freetown.

Minister of Trade and Industry, Dr Edward Hinga Sandi, said that the theme for the event, “Industry Development for Job Creation and Food Security” was a direct response to the vision of the President in Human Capital Development with focus on middle manpower training, which also resonated with the theme of the country’s 2020 National Budget Agenda.

He said that the project could provide over five thousand jobs in the next two to three years and disclosed that a similar project would be replicated in all five regions across Sierra Leone. He noted that the project would also establish a flour production facility with the capacity of two thousand five hundred metric tons production per day, adding that the venture would not only meet the local demands of flour but would become a major export line.

Minister of Higher and Tertiary Education, Professor Aiah Kpakiwa, said the SONOCO Group was also ready to help the country in the technical vocational education training that would help to take care of the middle-level manpower. He said the company would provide training for Sierra Leoneans in bakery mechanics and machinery. He also disclosed that within weeks, his ministry would operationalize technical vocation education centers in ten districts with plans underway for the remaining districts.

National Chairman for the Bakers Union, Chernoh Saadu Jalloh, said that they were particularly pleased with the government for its efforts in setting up the factory that would ease their work. He also commended the leadership of the New Direction for the reduction in the price of flour in the country and added that such a project was coming to the country for the first time ever.

Deputy Managing Director, Abdoul Karim Diallo, said that they were grateful to the government for providing them the environment to invest in a project that would directly generate thousands of jobs in the next three years and stated that the construction would take eight months. He said his group had heard the call of the government to initiate an investment that would contribute to the industrialization of Sierra Leone, heighten the technological level and create jobs.

“We will feed the brain hereby training young people by building a world-class training center for bakers to modernize the bakery profession in Sierra Leone. We will feed the tummy by producing bread in the bakery that will be built here and we will take care of the welfare of the human being because the equipment and the food that will be produced here will respect all the standards in terms of environment, safety and nutrition that will help strengthen the health of the consumers,” he said.

On his part, President Bio said that the private sector had to lead if sustainable development and growth were to take place, adding that the private sector was the engine for economic growth. He commended the SONOCO Group for moving quickly to establish a factory that would serve the country and the sub-region. He also assured that as part of its responsibilities, his government would continue to provide an enabling environment that would encourage investments.

“We have to be integrated if we are to create a market that will serve our purpose. We are a small nation with a small market but if we work toward creating an environment that is inviting enough to bring more, then some of the challenges we face will go away. Creating an ecosystem that is conducive for investment is a collective effort not only from the government but from everyone.”

“We must work collectively to support development in this country. I appeal to us all to create that enabling environment that will support private investment by looking at our own attitudes. We are good people and I want to encourage and inspire every Sierra Leonean to change our attitudes for the good of our country,” he ended.