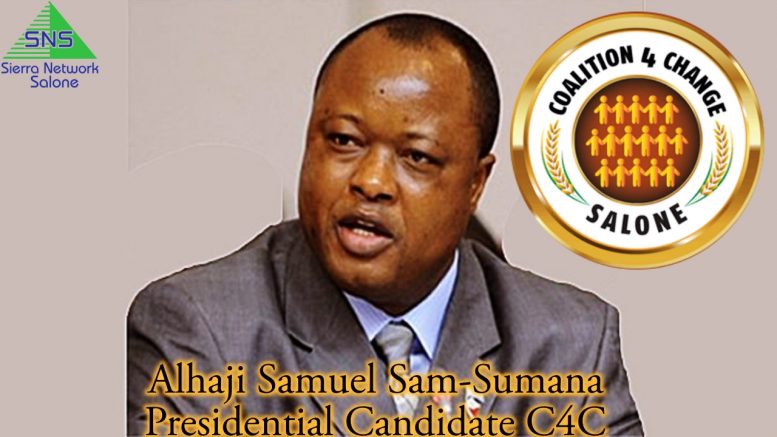 MambaTV Report: Sam-Sumana: The Comeback Kid And Sequence Of Major Events Surrounding His Sacking And His Seemingly Triumphant Return

Following the just concluded first round of presidential elections in Sierra Leone, former vice president Alhaji Samuel Sam-Sumana, who was expelled from the ruling All People’s Congress (APC) party and subsequently sacked by President Ernest Bai Koroma, is today the most sought after. After pulling 3.5% of the votes nation-wide and dominating his home district—a critical swing block vote, Sam-Sumana is seen as the one who will decide the outcome of the run-off presidential election scheduled on March 27, 2018.

But Sam-Sumana’ s recent political journey has been everything but a smooth ride. As he contemplates his decision whether to endorse the presidential candidate of his former party, which stands accused of ganging up to bring him down or that of the main opposition, MambaTV recounts major events in Sam-Sumana’ s journey. This recount begins on the day Sam-Sumana was quarantined because one of his bodyguards had reportedly died of Ebola, to March 13, 2018, when it became apparent that he will likely decide who becomes the next president.

SATURDAY, FEBRUARY 28, 2015: Vice-President Alhaji Samuel Sam-Sumana voluntarily put himself into 21-day quarantine after John Koroma, one of his bodyguards reportedly died from Ebola.

FRIDAY, MARCH 6, 2015: Upon the recommendation by a nine-member disciplinary committee of the ruling APC, headed by Alhaji Ibrahim Ben Kargbo the APC National Advisory Council (NAC) unanimously voted to expel Sam-Sumana from the APC. The APC cited the results of an investigation into his conduct which accused him of anti-party activities and lying that he was a Muslim and has a master’s degree. Sam-Sumana denied all allegations.

SATURDAY, MARCH 14, 2015: A group of armed men visited the home of the vice president after his personal bodyguards were disarmed. Sam-Sumana left his home and reported to have sought refuge and requested asylum from the US Embassy in Freetown, claiming that his life was in danger. APC denied then that the vice-president was under threat. Darby Holladay, a State Department spokesman, expressed in a statement that, “The US can confirm that Sierra Leonean Vice President Samuel Sam-Sumana is not at the US embassy in Freetown, as some media outlets have erroneously reported”.

TUESDAY, MARCH 24, 2015: Sam-Sumana filed an injunctive relief, seeking to prevent Foh from continuing to serve in the capacity as vice president pending the determination of the constitutionality of the president’s action.

MONDAY, APRIL 20, 2015: Sam-Sumana challenged his sacking as “unconstitutional” and filed a petition in the Sierra Leone Supreme Court citing that the president did not have the authority to unilaterally sack his vice president.

TUESDAY, MAY 5, 2015: The Sierra Leone Supreme Court unanimously ruled dismissing Sam-Sumana’s injunctive relief citing that the applicant failed to produce adequate evidence in support of the injunction being sought.

THURSDAY, OCTOBER 15, 2015: Sam-Sumana fled Sierra Leone in what was described as showdown at the Lungi Airport, where his diplomatic passport was seized based on orders from above.

MONDAY, NOVEMBER 27, 2017: The ECOWAS court ruled that Vice President Sam-Sumana’s fundamental human rights to fair hearing and to participate in politics, as guaranteed by the African Charter on Human and Peoples Rights were violated. The Court fell short of ruling on his reinstatement and ordered damages to the tune of $210 million.

THURSDAY, APRIL 13, 2017: In a triumphant welcome, Sam-Sumana returns to Sierra Leone to register to vote and also run in the presidential election under a new party—Coalition for Change (C4C).

TUESDAY, MARCH 13, 2018: Sam-Sumana’s C4C party pulled 3.5% of the votes, dominating the polls in his home district, Kono, and now seen as the decider as to who wins the run-off presidential election scheduled on March 27, 2018.