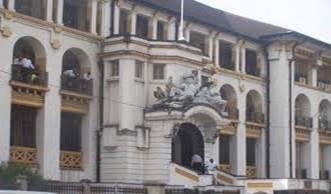 The APC tribal monger on social media, Gibril Bangura, has decidedly graduated from insulting President Maada Bio, to the commission of treason against the state and sovereign people of Sierra Leone. In his latest video, which was recorded and released with treasonous intent, Gibril Bangura openly called for the military overthrow of President Bio’s elected government. This is not the first time Gibril has crossed the bounds of decency. Ever since APC’s defeat at the polls, Gibril has never stopped short of directing maternal insults at President Maada Bio, usually in tandem with seditious messages calling for the violent overthrow of the government in Freetown. It is time for the SLPP government to respond to Gibril Bangura’s treasonousness, and here is a doable option.

The Sierra Leone Government can respond by formally charging Gibril Bangura with inciting Sierra Leoneans, including enlisted soldiers, to violently overthrow a democratically elected government. After unsealing the indictment at a press conference, the government in Freetown can officially submit an extradition request to the Federal Government of the United States of America, demanding Gibril Bangura’s arrest and expulsion to Sierra Leone, vis-a-vis the above-mentioned indictment.

The extradition request should be hedged by Gibril Bangura’s status as a native-born Sierra Leonean, his picture, place of residence in the United States and the evidence against him, which can be easily collected from the coup-inciting videos he routinely releases. If Gibril is a green card-holder, the allegations in the extradition request COULD prompt Washington to REVOKE his permanent residency. Permanent residents of the United States are required to observe certain legal caveats, including a specific fiat ordering green card-holders to unfailingly obey American law. Turpitude and felonies like drug possession and treason, can lead to the revocation of an American green card.

If Gbril turns out to be an American citizen, the Federal Government of the United States MAY not easily extradite him to Sierra Leone. Still, a well-prepared extradition request from an elected government in Freetown can create legal nightmares for Gibril in America. After all, United States law expressly forbids American citizens from conspiring to commit treason, whether domestically or internationally. In 2015, for example, two Gambians who are also American citizens, were arrested, prosecuted and imprisoned for taking part in a coup against Yahya Jammeh. Although Washington knew Jammeh as a dictator, the two, war-waging American-Gambians were arrested and prosecuted because United States law unambiguously criminalizes the designs of American citizens who unilaterally hatch coups against foreign governments. When backed by indubitable evidence, an extradition request from Freetown can lead to a multitude of legal problems for Gibril Bangura in America, thereby teaching him a lesson against tribal primitiveness.

As a Sierra Leonean, Gibril has the RIGHT to CRITICIZE the SLPP government in Freetown. However, incitement to military rebellion is wholly different from legitimate opposition in a democratic society. A semi-illiterate enlivened by tribal hatred and desire for a violent military coup in post-APC Sierra Leone, Gibril Bangura wants bloodshed, not democracy. The semi-illiterate Gibril believes his tribesmen must either rule Sierra Leone at all costs, or coups and war will ruefully ensue. Gibril’s tribal savagery must be stopped before it matures into physical warfare. In the interests of the seven million citizens who live within the borders of Sierra Leone, the government in Freetown should respond to Gibril Bangura’s calls to arms, by legally hitting him where it hurts. It is better to try and legally hit Gibril, and probably fail, than to let him menace Sierra Leone like a rabies-infested dog without a leash.