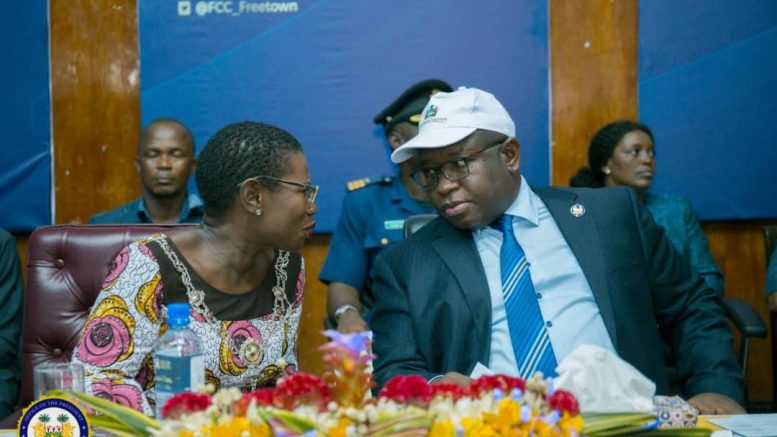 Ponder My Thoughts …President Bio must stop this futile cold war between Government and the Municipality of Freetown.

A cold war of sorts is being fought over the Municipality of Freetown that is affecting its long-suffering residents. Freetown is Sierra Leone’s major urban, economic, financial, cultural, educational, and political centre, as it is the seat of the Government of Sierra Leone. The inhabitants of Freetown are extremely heterogeneous.

With a population of 1.1 million, it is home to at least 74 informal settlements, many of which are perched on the last vestiges of land before the sea.

The city is overcrowded, traffic management is poor and parking is a problem. There are problems with service delivery including huge challenges with the poor transport system, solid waste management, and sewage management.

Every conceivable group is now represented in this melting pot of a metropolis, with its city council headed by Mayor Yvonne Aki Sawyer of the opposition APC party.

We have however unfortunately seen a spate of problems since her election in 2018. After a brief honeymoon period with the SLPP government, her administration has been plagued by incessant fallouts with Ministers and other government supporters. The physical attacks on her, public verbal lashing by Ministers and the general disrespect shown her indicate all is not well.

The most recent problem has now resulted in an impasse relating to the implementation of the new city rates, with the Ministry of Local Government putting a stop to its implementation until its guidelines are followed. Meanwhile, the FCC struggles with meeting its basic commitments and everything is in limbo.

It is encouraging to note that two senior and respected civil society activists, Marcella Samba Sesay of the Campaign for Good Governance and Ibrahim Tommy of the Center for Accountability and the Rule of Law have made their abhorrence with government’s actions public in a joint op-ed piece.

They wrote, “We are worried that if urgent action is not taken, the limited progress being made at strengthening local governance may soon disappear. We investigated what the current situation is with regards to affected Council functions and found that:

These include the Ministry of work ostensibly stopping a project to supply dozens of 10,000 litre tanks to supply water to informal settlements as this was “outside the FCC’s mandate”, halting the Transfer station project for 4 months in the same manner, the FCC controlled parking zone project for 6 months and halting the repair of the sewage overflow on the King Jimmy Bridge.

They lament about the property tax issue

“Why should a lawful measure that seeks to create a fair and balanced property tax regime in the city be paused with no clear timeline for when it should resume? The current stalemate will only dash 15 years of advocacy and capacity building investment by democratic actors towards the Councils.”

We also learn from them that of the Le2.1bn transferred from the government to the FCC only Le211M is not tied or restricted. The rest of the allocation is to cover approved budgets for devolved functions such as health posts, hospitals, district health management teams, libraries, youth, sports, etc. This cannot even remotely meet the FCC’s monthly staff cost alone is around Le630M.

The impasse continues even though FCC has bent over backwards to comply with all the Local Government Ministry’s demands. These have been followed by commonsensical suggestions to reduce the level of planned rate levies by up to 30% as reverting to the old system which captured only 30% of rate payers was not a viable option.

There is obviously a cold war going on between government and FCC and we the residents of this metropolis are the unwitting victims. In looking for an answer let us keep in focus the fact that the government of the Freetown Municipality has been dominated by All People’s Congress (APC) since 2004. The APC won the city’s Mayorship and vast majority seats in the Freetown city council in the 2004, 2008, 2012 and 2018 local elections by more than 67% each. Accommodation with any SLPP government has therefore been very difficult.

Under such circumstances, service delivery performance may provide one party an advantage, or disadvantage, among voters in subsequent elections.

The central government will, therefore, have a preference for employing “strategies of subversion”, or tactics to purposely reduce the autonomy of local government under conditions where the latter may be held accountable for good service delivery and increase autonomy when local government can be targeted for poor performance.

Other tactics adopted may include reducing inter-governmental transfers and local tax-raising authority, and increasing administrative ambiguity over who is responsible for delivering which services.

Could it be that this is what is happening in Freetown?

We should honestly ask ourselves if recent government actions are not tantamount to recentralisation. What is the government’s beef with FCC?

Is it really because they doubt FCC’s capacity at service delivery or is it pure political considerations?

Do they want FCC to be seen as ineffective for a while or do they want to cripple it all together and then appoint a management committee?

Why is the FCC being prevented from implementing its property tax system when several other councils are already implementing the same systems without the Ministry’s guidelines?

These should be questions raised not only by FCC but by the rest of us poor suffering residents.

The Mayor has obviously shown her ability to master her brief and forge alliances and has a considerable number of achievements under her belt; so it is not easy to brand her and her council as being ineffective.

The question being asked is whether the government is in fact not cutting its nose to spite its face.

This situation need not continue as it is at present. In fact, there are many opportunities for working together in this melting pot of Freetown to sort out the myriad problems of the city.

Recent collaboration between the SLRSA and Transport Ministry with the FCC has resulted in dividends in street clearing and easing of traffic. There is collaboration with the Urban Resilience Programme. One hopes common sense will prevail for both parties to work together to decongest the city.

There are opportunities galore for collaboration on housing issues. Safe and durable housing is particularly lacking in Freetown. There could also be a collaboration for example in strategic local plans, issuance of building permits, and preparation of land use plans.

The rapport on Education and Health issues has sometimes been good. The FCC’s three-year plan for the city is to transform Freetown within four clusters and 11 priority sectors, with the clusters being: resilience, human development, a healthy city, and urban mobility will obviously need the collaboration of the central government.

The Government has made an undertaking in its medium term development plan in the section on Strengthening decentralization, local governance, and rural development thus:

It is recognized that the cornerstone for ensuring inclusivity in the governance system at all levels is the empowerment of local governments and implementing a decentralized approach to efficient service delivery. Efforts are being made to build the capacity of local governance structures, with the aim of equipping them with the requisite skills and resources to deliver services and uphold peace, stability, and justice, by promoting inclusive local coordination structures.

What a laudable objective! Mainly because of this, the Inter-Ministerial Committee, chaired by the Vice President on March 7, 2019, agreed that further 28 of the 36 outstanding functions would be devolved to local councils with immediate effect.

The Government needs to prove however that its rhetoric on decentralisation and actions is done in good faith to actually bring about meaningful decentralization.

There are still some government operatives who are stuck in “reverse gear” and only see “reds under the bed”. Some of these want no cooperation at all with the opposition and some are said to be glad that the Mayor has been made to “grovel”.

We need to move beyond such antics as a nation if we are to develop.

Clearly the FCC vs Govt. debacle is putting us light years behind in service delivery. This hostility actually does remind me of an old Soviet joke lampooning what seemed to be a hostile reaction to wealth:

A genie says to a peasant, “I will grant you any wish, but remember that I will give your neighbor twice what I give you.” The peasant thinks for a while and responds, “Poke out one of my eyes.”

This is what naysayers seem to be doing, by calling for “killing” the FCC.

This cold war must end for the sake of us all in this city. This impasse with the FCC has gone on long enough and has done and portends to do a lot more damage to the city than at present. More residents and well-meaning civil society groups should emulate CARL and CGG and pile on the pressure to end this.

President Bio must step in to end this senseless cold war. This can actually result in a win-win situation and also augur well for the development of the city.