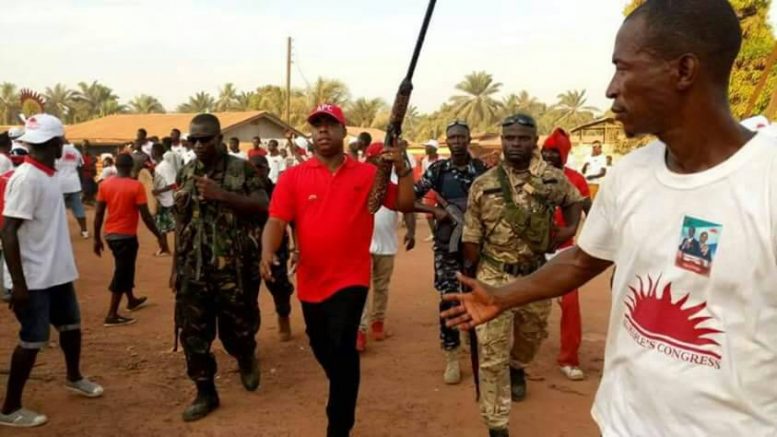 APC is a party that comes to power through the physical spilling of human blood and stays in power by feasting on the lives of innocent citizens.

Every day, the ugly evidence of wanton barbarity perpetrated by this vampire outfit just keeps piling up to the skies.

A cursory look at the history and current conduct of the APC leadership shows a consistent picture of violence, intrigues, pilfering, falsehood, and satanism running through the blood-red fabric of their political profile.

While we were still reeling from the impact of incoming news that Minister Karamoh Kabba’s driver was mowing people down in Tankaro using his vehicle as a guillotine, then the attempted assassinations in Khamalo surfaced.

Each of these despicable incidents referred to here will serve as yet another proof (if any evidence were needed) showing just how jittery and desperate the APC has become.

Using depraved hoodlums to cowardly ambush a peaceful opposition party convoy that was going about performing its officially scheduled campaign program is not just dangerous, but it is downright dirty.

It is an indication of how low this corrupt cabal can descend in their failed bid to cling on to power that they have never deserved.

Toying with our treasured democracy and hard-earned peace is an unforgivable act of recklessness that must be roundly condemned by every patriotic Sierra Leonean.

We as Sierra Leoneans shouldn’t sit by and complacently allow a small group of selfish crooks to take our country down any lower than they already have.

They know that their constitutional mandate has long ended and they have never enjoyed any moral legitimacy, so they are planning to stir trouble in the land to create a cloud of instability through which they hope to crash their way into an extension.

For these are people who only ever thrive on calculated chaos and dramatized falsehood.

A cursory look at the history and current conduct of the APC leadership shows a consistent picture of violence, intrigues, pilfering, falsehood, and satanism running through the blood-red fabric of their political profile.

So when EBK’s State House communications mouthpiece, Jarrah Kawusu Konteh, came out sharing very deceitful audio distorting the Khamalo attack it merely reminded me of what the APC used to do in the 70s.

After bludgeoning and hanging their proficient communication guru, Ibrahim Bash Taqui, the red rogues had nobody with the finesse of the “We Yone” newspaper founder to handle the propaganda section for their party efficiently.

That led to the emergence of brainless operatives whose conceptual crudity and personal depravity became their primary qualification and badge of relevance.

That is the time when horrendous late night dramatizations started to haunt our streets, with hired hoodlums boarding unmarked government Land Rovers and roaming our towns and villages in the small hours of the night spilling animal blood at strategic junctions and screaming away into the night as they simulated someone being seized and slaughtered.

That was the hellish spectacle that they whipped into the innocent psyche of the ordinary Sierra Leoneans which created such a harrowing air of fear that the allegation of “cannibalism” was for long plastered on every leaf of the palm tree.

Now, in the case of the present day Jarrah Kawusu Kontehs it is the clicking of fabricated audio clips made with the duplicity of acting accomplices whose duty it is to voice out previously rehearsed lines in the hope of making the culprit into the victim.

In the Khamalo assassination case, that woman may have just played her scene way too much with her outlandish claims of “SLPP members hunting for the heads” of several named people, including that of Samura’s mother.

The very fact that a state servant of the caliber of Kawusu could dare to share such an obscenity on public forums and hail it as “proof” that “the SLPP was responsible” FOR ATTACKING THEMSELVES, is another low point in their dive to the depths!

What a very distasteful proposition they concocted there!

And that is just another reason why this cartel needs to be dismantled and discarded, as they know THEY WILL!