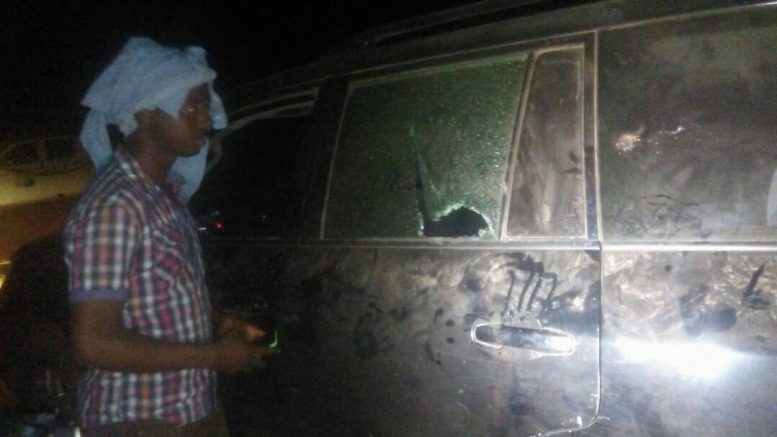 Khamalo, Sanda Loko Chiefdom, Karene District, Northern Province: A few hours ago, Tuesday, February 20, 2018, the SLPP Presidential candidate, the retired brigadier Julius Maada Bio and members of his campaign team, came under massive attack inside Khamalo, the hometown of APC’s Samura Kamara.  Many observers have concluded the attack in Khamalo was a planned assassination attempt on Bio and his team of supporters. 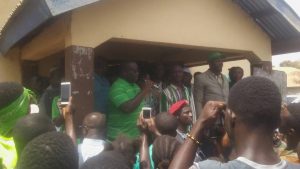 SLPP Under Serious Attack At Khamalo The Hometown Of The APC Presidential Candidate, Samura Kamara

I have just received the report, in a form of a distress call from members of our Party Campaign Team that while the Team is on their official campaign schedule at Kamalo they have just come under serious attack by members of the All People’s Congress (APC).

The report states that several of our members have been injured. As a result, the Presidential Candidate of the SLPP Rtd. Brig. J. M. Bio and his team have aborted the campaign and are currently pulling out of KAMALO, Sanda Loko Chiefdom in the Karene District.

The attackers arbitrarily seized three of the escorting motorbikes and burnt them down entirely as the SLPP team quickly maneuvered and retreated their way out of the town.

Today’s stop in Khamalo was part of the agreed to and documented official campaign schedule which took the SLPP campaign team through several towns and villages in the Kambia, Karina and the Bombali districts, including Samaya Tambaka, where they were very well received.

As soon as the SLPP team entered Khamalo town center, escorted by official government security guards, and were ushered to the spot where the meeting with the townspeople was supposed to take place, they found themselves surrounded by a hostile mob.

The mob was wielding sticks and stones and, immediately started pelting the SLPP gathering with rocks in what appears to be a pre-planned and well-calculated attempt on the lives of the SLPP leadership.  Everyone had to make a fast retreat under the hail of stones and sticks.

At the time of writing the convoy is on its way back to Freetown.

Another report reaching us also indicates that a group of SLPP members was today violently attacked in the LOKO city of Kalangba, in the Northern Province.

It is a well-documented fact that the APC is not just an obscenely corrupt party but, it is also an outfit with a very violent history.

Why Is The APC Infusing Violence Into The Elections?

Right now, feeling the reins of despotic power slowly but surely sliding from their grips, it is not unforeseeable that the APC regime would be determined to hang on to power by any means, sordid and violent.

However, even by their despicable standards, it is a colossal understatement to opine that today’s developments represent a severe move by the APC and their supporters to drain our smooth democratic process in the hope of prolonging their stay in power.

We will appeal to all SLPP members everywhere to stay calm and to follow the peaceful and disciplined leadership exemplified by our leaders as we move closer to March 7.

Let us, please endeavor to stay focused and law-abiding as we keep moving to State House in our unstoppable strides.

Stay tuned as we continue to monitor developments.

1 Comment on "Assassination Attempt On Maada Bio In Khamalo!"